Remember that scene in Far and Away, the Tom Cruise and Nicole Kidman movie, where Cruise gets all excited after putting his stake in the ground to claim his land out West?  That movie wasn’t very good, so you probably don’t remember, but trust me when I tell you that he was a homesteader.  If Cruise was putting roots down in the Badlands, the reason there wasn’t a sequel was because he didn’t make it. On a good day, Badlands weather is no picnic, but we had fun with the wind, cold and rain.

Had our first legit “boondocking” camp site there (Walmart doesn’t count). Boondocking is basically camping off the grid and this spot was isolated and then some.  Had to drive careful as it was a long way down but provided spectacular views of some Badlands badness.

Saw bison, rams, prairie dogs (E was disappointed they don’t bark) and went on a hike through a field of rattlesnakes or so the sign said.

Our first national park on the trip didn’t disappoint.

Editors note – get used to seeing us in the same clothes every day. Thank goodness there’s no BO out West. 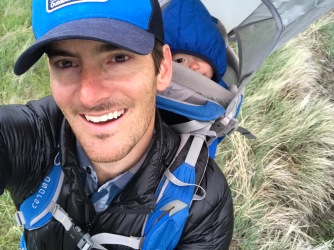